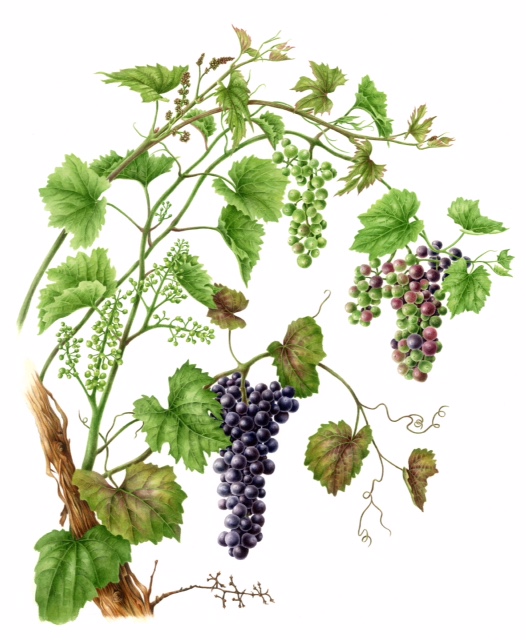 “We see so many images of nature captured in different mediums but not often by natural science illustrators and painters,” notes Barbara Nair, Director of Spectrum Gallery. “It’s easy to assume they work only for scientific journals, magazines or illustrate books. Yet, these artists are extraordinary, not only as fine artists but also as highly knowledgeable experts on their subjects. It’s important to for us recognize their contributions to our appreciation of the natural world.”

Artists participating in the Spectrum show include Dick Rauh, a watercolorist whose illustration of Carol Levine’s “Guide to Wildflowers in Winter” sparked an interest in the dry fruits and other remnants of out-of-season natives. His enlarged versions earned him a Gold Medal in the January 2006 Royal Horticultural Society Flower Show in London, where he also gained a “Best in Show”. Recently he completed a solo show at the Brooklyn Botanic Garden in New York. Painter and illustrator Jan Prentice, a founding member of Connecticut Natural Science Illustrators, has exhibited extensively including at the New Britain Museum of Art, University of Colorado Museum of Natural History, and Yale Peabody Museum. Her work was included in “Focus on Nature” an international juried show at the New York State Museum. Her pieces were acquired by the museum for its permanent collection. Karen Elias an award-winning artist who works in oils, colored pencil and, increasingly, now with digital photography shows two of her award-winning digital prints. Artist Kathie Miranda presents a variety of works in watercolor, colored pencil and silverpoint. In a time before graphite pencils, artists used metal point, a small rod of metal sharpened to a point, to make marks on a prepared paper surface. She treats this ancient technique to a modern twist with the delicate addition of pastel dust. She is an instructor at The New York Botanical Garden and serves on the Board of the American Society of Botanical Artists. 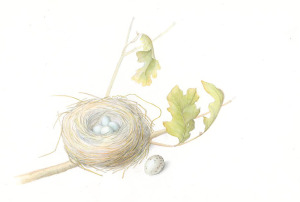 Artist Mary Christiansen, an instructor at the New York Botanical Garden and the Brooklyn Botanic Garden, is drawn to form and fascinated by the effects of light striking surface texture. Her most recent work concentrates on nesting birds, hummingbirds, and shore birds. She has exhibited with the American Society of Botanical Artists at the New York Horticultural Society and at the United States Botanic Garden in Washington, DC. Another participating illustrator, Sarah Saltus Siddig, is a member of the American Society of Botanical Artists and the Guild of Natural Science Illustrators. She has taught Drawing, Colored Pencil, and Watercolor at the New York Botanical Garden for eight years. Her work has appeared at the Tang Museum in Saratoga Springs, the Mariposa Museum in Peterborough, NH, and at the Yale Peabody Museum. Other artists showing are watercolorist Betsy Rogers-Knox, the recipient of the Silver Medal in 2013 at the Royal Horticultural Show in London. Linda Anderson Miller, a painter and illustrator whose work appears in various media including books of poetry. She teaches courses in scientific illustration as part of the Connecticut Natural Science Illustrators program at Yale’s Peabody Museum. She will also be teaching Drawing from Nature from May 30 to June 20 at Spectrum Gallery.

Others participating include illustrator and professor of illustration Dolores Santoliquido. Her work has been exhibited extensively at the Smithsonian, Longwood Gardens and the Hunt Institute for Botanical Documentation (both in Pennsylvania). Dorie Petrochko, an accomplished painter and natural science illustrator, has travelled extensively painting birds in their natural habitats. She is the recipient of awards and fellowships including the Don Eckelberry Fellowship Award for Wildlife Painting from The Philadelphia Academy of Natural Sciences. Kathy Goff, whose artwork is found on greeting cards, for the National Wildlife Federation, and the American Humane Society is showing several of her award-winning pieces. Sharon Morgio, also a member of the Guild of Natural Science Illustrators, is a watercolorist and accomplished calligrapher who delights in showing the almost human antics of birds. Linda Thomas, a muralist, fine artist, and illustrator is displaying two of her larger works depicting flora, fauna and animal life within the context of their natural environments. Her illustrations have appeared on book jackets, album covers and in magazines and on fashion items for designer Nicole Miller.

Also participating is award-winning artist Glen Heller who has been carving wildfowl for over 30 years. Each bird is carved in intricate detail taking about 200 hours of carving and painting using specimens from the Peabody Museum of Natural History at Yale. Another sculptor Susan Van Winkle is an artist who captures images of wild and domestic animals in bronze, alabaster, marble and stone. She has won the Award of Merit from the National Art Exhibition of Alaskan Wildlife and Award of Excellence from the Maritime Gallery at Mystic Seaport’s International Marine Art Exhibition. 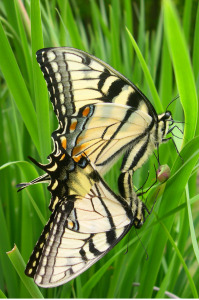 Photographers include the award-winning flowers of Ed Nano (IN MEMORIAM) and Dianne Roberts who captures nature’s detail and beauty such as insects and wildflowers in macro images. George Fellner, an architect and photographer who has been extensively published will display two of his pieces from his, Imaginary Realms, stone and crystal series. And West Coast photographer, Wayne Dollemore, presents one of his metal prints of nature in urban decay.