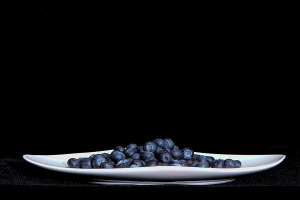 “Food, Glorious Food! Is it worth the waiting for?” A question to contemplate and now to be explored in a new exhibition entitled Food: The Good, the Bad, and the Ugly at Spectrum Art Gallery and Store, March 27 – May 10. The six-week show presents the work of regional artists who depict food – both delicious and unappetizing – in a variety of mediums including collage, botanicals, fabric, papier-mâché and wood wall sculpture, photography, and paintings in oil, acrylic and watercolor.

“We all have some sort of relationship with food. And as the title of the exhibit suggests, we explore it in all its glory and at times its unsightliness and in ways that are both healthy and unhealthy for us,” notes Barbara Nair, Director of Spectrum Gallery. “Examining how the visual arts illustrates food allows us to understand and imagine its complexity and cultural relevance.”

Artists participating in the Spectrum Gallery show include Marny Lawton, a representational artist who is showing numerous stunning food still lifes in oil. Her work spans a broad range of mediums and subjects including drawing, oil and egg tempera. She has won multiple awards including at the Mystic Arts Center Juried Show. Her work has been published in multiple art magazines such as the American Art Collector and Southwest Art. Other highly regarded artists are New York oil painter John Folchi showing several of his larger than life still lifes. Folchi is represented in numerous corporate collections including Pfizer, Fidelity Investments and UPS. Another featured artist is Peter Seltzer whose paintings in oil and pastel have been exhibited at numerous venues including the Butler Institute of American Art, National Arts Club, the New Britain Museum, and the Salmagundi Club. He has been designated a Master Pastelist by the Pastel Society of America, with work and technique discussed in articles in American Artist Magazine, the Artist’s Magazine, Pastel Journal and Connecticut Magazine.

Other artists participating include award winners Anita Gregorski, May Phillips and Paul Baldassini. Gregorski works in oil, acrylics and watercolor capturing both realist still lifes and familiar nostalgic scenes common in New England. Phillips, an acrylic and watercolor painter, has exhibited her work at the State of Connecticut Legislative Building. In 2002, she was selected to be the Convention Artist for the New England Traditions Convention in Providence R.I. Baldassini, an oil painter whose technique is similar to that of the old masters, incorporates a more contemporary style to his work. He has shown in group shows and won multiple awards including a recent “honorary award” in Artist’s Magazine’s annual “Over 60” competition.

As humor is often part of our view of food, there is Ellen Gordon’s acrylic Happy Cakes and Broccoli Dance, with elements that dance across the canvas. For a bit of whimsy, there are the French-inspired unique collages of the imaginative Jill Butler and the painter and mixed media artist Rosa E. Colón who depicts subject matter in a “hyper-real reality” working with a variety of mediums including oil, watercolor, and pressed flowers and leaves. For food that literally jumps off the wall, there are the papier-mâché and wood 3D wall sculptures of Margaret vonKleist Edmond. Though trained as a painter, she could not resist her passion for sculpture and combines them both in her work. Painter Alan Walker in his vibrant acrylic street scene reminds us not all food is good for us. In simple and elegant single line paintings, artist (and mother of five) Christine Miller depicts the delicate yet vital need of children being fed both prenatally and after birth through their mothers. Oil painter Layne shows every root in her oil portrait of onions on display, and Susan Tait Porcaro, an artist who favors pieces in colored pencil, highlights every fabric fold and reflection in her food still lifes. And returning to Spectrum Gallery, fabric artist Wilma Cogliantry presents her intricately designed quilt “Peaches and Cockatiels”.

Photographers include Phyllis Sinrich who exhibits her work in area juried shows, most notably the annual Faber Birren National Color Award Show at the Stamford Art Association, where she has won several sponsored awards, and won First Place in the Atlanta Journal-Constitution Annual National Photo Competition. Barbara Hanson, who has appeared in numerous juried shows, is showing her award-winning photograph of delectable “Blueberries”. Other photographers in the show are Jason Neely, a photographer from Middletown, whose work ranges from landscapes to street photography, with the natural world and travel his favorite subjects. For the first time at Spectrum, Ralph Chappell, who specializes in product photography, headshots and sports, presents two of his vivid images. Photographer Sally Perreten presents a variety of images with strong composition and at times provocative subject matter. Perreten’s work has been sold in various regional galleries including Spectrum Gallery. Finally, the late Ed Nano (1917-2011) renowned for still life and food photography for Stouffer’s is represented. He is presented by his daughter, Kathy Nano of Deep River, Connecticut.